Fraudulent scamster, fooling people in the name of “fact-check”: TrueIndology on Pratik Sinha

Here is what True Indology has posted

I am going to expose one fraudulent scamster who has been fooling people in the name of “fact-check”. I am talking about the cheat named Pratik Sinha . He runs a fraudulent business named Alt NewsAlt News Hindi.

He has been lying through his teeth. He has been duping people in the name of “fact check”. He has been swindling money in the name of donations and his business is thriving because the left-wing in India is very dumb and they do not read books. They cannot understand that he is fooling them big time. They subscribe to him, owing to their their confirmation bias. They do not possess the intellect to see beyond his fraud. In this post, I will prove every line I just wrote.

This tweet is a screenshot of my Instagram post which was about a Sadhu sitting on the banks of Dal lake in Srinagar. I mentioned that the Sadhu was sitting in snow (https://www.instagram.com/p/CH5GxzbAxzK/ ).Pratik Sinha claims that the original picture of the Sadhu does not mention any snow. He claims that it was I who fabricated the part about Sadhu sitting in the snow. In support of his claim, he produces a random online link. He calls this exercise of his a “fact check” and he smears me by labelling me as “True Fraudology”.

This has been Pratik Sinha’s Modus Operandi from day one. Use reverse google search and random, unreliable internet blogs as a source about a subject over which he does not have any knowledge. So, what is the truth? Did I fabricate the part that the Sadhu had been sitting almost naked in the snow? Was I trying to glorify the Hindu sadhu for a feat which never happened? Let us see. Unlike Pratik Sinha and AltNews, I do not rely on random online blogs. I am very professional about the work I do. I got this image from a book titled “Kashmir: Its New Silk Industry”. It was written by Sir Thomas Wardle and published in 1904. Thomas Wardle was a silk businessman who visited Kashmir to revive the Silk industry in that region. Within the book were pictures clicked by his friend Geoffrey W. Millais. The book is freely available on archive. 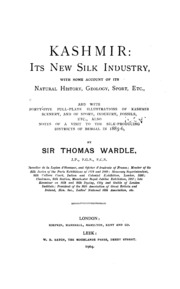 It is also digitally available on the website of Government of India and for those who geographical region has access, a clear copy is available on google books

Kashmir its new silk industry with some account of its natural history, geology, sport etc.
Sorry, you need to enable JavaScript to visit this website.

In Page 376 of the aforementioned book, we find the picture of the Sadhu that I used in my Instagram post. The page contains the aforesaid picture of the sadhu and its caption. The caption is also available at the beginning of the book in the section named “List of Illustrations” (page XV). What does the caption of the picture say? Yes, the caption of the picture says “Holy man, Dal Lake, sitting in the snow in Winter”. And what was this cheap, unethical fraud Pratik Sinha saying? Yes, he was saying that I fabricated this part about snow! When the fact is that Pratik Sinha has not read the book and does not know anything about history or climate of Kashmir.

The fact that the Sadhu was sitting in extreme snow was attested by the original photographer who took the picture which was published 116 years ago in a book! There are many subtle factors to be noticed in this fraudulent attempt of Pratik Sinha to smear me.

1)The subtle Hinduphobia of Pratik Sinha. How could a Hindu Sadhu perform extraordinary feats like sitting almost naked in the snow? In his world, It HAD to be false! He would do well to watch many videos of Sadhus living in extreme snow that could be found at a click on YouTube. Pratik Sinha the ignoramus needs to educate himself.

2)Now , I make a remark about Pratik Sinha’s “source”. (https://www.gettyimages.in/…/kashmiri-man-sits…/3267804) His source is a British Media company named “Getty Images” that supplies stock images. As such, it is only a secondary source. The information is not always full and accurate. Yet, when we read this link carefully, we see that it NOWHERE says the sadhu DOES NOT SIT in the snow. It simply omits this detail. That it says he did not sit in the snow is Pratik Sinha’s own fabrication.

So, what did Pratik Sinha do? He used a random internet link whose information is not complete. He completely twisted and misinterpreted the information to make his FAKE claim and then pass slanderous insinuations against me with an intention to malign me. Why? What made Pratik Sinha indulge in the use of fraud and deceit to slander and malign me? the fact that I write without Anti-Hindu bias. This bothers his handlers, funders and their left wing ecosystem. Their aim is to discredit me so that they could freely indulge in their lies and deception.

Also, notice the utter illiteracy and ignorance of Pratik Sinha about the topic on which he is pontificating. Anybody who has visited Kashmir knows about the condition of snow at Dal Lake during winter. Only an utterly stupid moron would claim there would be no snow in Kashmir during winter. And Pratik Sinha proved that apart from being a fraudulent Hinduphobe, he is also utterly foolish and ignorant.

This is not the first time I have exposed the cheating fraud Pratik Sinha . I wrote a 40 page long article that exposed his lies. I also wrote another article which proved how he propagated malicious lies about Direct Action Day riots and Gujarat Riots. He also published absolutely slanderous and defamatory lies against Narendra Modi in his “Truth of Gujarat” blog (which he now deleted). I have documented his fraud and exposed him in these articles. They have remained unanswered since 3 years.

I hope that at least now stupid left wingers notice what kind of a fraud they are endorsing in the name of ideology. I really expected better from them. Enchanted by the guile of this fraudster, they are proving themselves to be complete illiterates

TRS copy-pasted Manifesto from 2016 as no promises fulfilled: Kishan Reddy

Paneer was not introduced by invader Asian Timurids, it existed since 12th Century : True Indology

Fact Check- Did CJI Bobde ask rape accused to marry victim? How it Liberals made it out of context..

Covid-19 Vaccine FACTs: All you need to know !