Read here about the hidden history of Bhagyanagar, Bhagmati, Hyderabad and the Bhagyalakshmi temple at Charminar.

From a long time, Secularist-Islαmist historians and Media have been on a relentless campaign to hide and deface the Hindu history and heritage of Hyderabad. They say “Hyderabad was never Bhagyanagar. Bhagmati never existed”. Here is a sample: 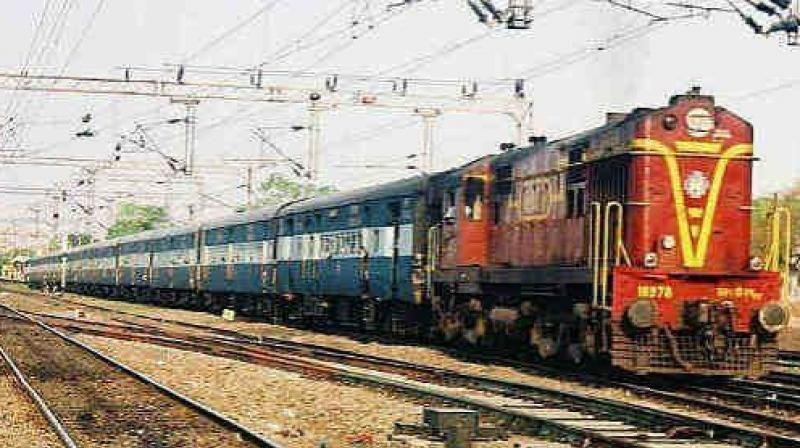 Hyderabad was never Bhagyanagar
He said that when Muhammed Quli Qutb Shah built the new city he would pray that people from all over would come and settle there.

It is shocking that such campaign of lies is carried out in face of direct evidence. Here is a contemporary Qutub Shahi painting of wedding procession of Qutub Shah & his Hindu wife Bhagmati. Hyderabad is named after her. It was commissioned by their grandson in 1650 CE.

Notice the Hindu style wedding with women carrying Aartis. I explain its significance below & demolish the secularist claims.

Lets start with a brief background.
Qutub Shahi dynasty was established by Sultan Quli Qutb Mulk (1470 CE-1543 CE). He came to India from Iran. India was then a land of fabled wealth and limitless opportunities (pic of Sultan Quli).

Sultan Quli Qutub Mulk came to India from Hamadan(Iran). When he first stepped on Indian soil at Chaul, the port city on the western coast in India, he picked up a clump of black clay & pledged that he would establish Shia religion all over India.

Sultan Quli started his career in the service of the Bahmani king Shihabuddin Mahmud.He rapidly rose in the ranks and was granted the Governorship of Telinga country. After the death of Bahmani sultan in 1518, Sultan Quli established himself as an independent ruler at Golconda.
Secularist historians have made us believe that Golconda fort was built by Sultan Quli in 16th century. Recently, they celebrated 500 years of Golconda.

But this is a LIE

Golkonda Fort completes 500 years
One of the greatest architectural wonders and a must visit historical places in Hyderabad, Golkonda…

Golconda fort was NOT built by Sultan Quli. It existed much before Sultan Quli was even born. It was built by Kakatiyas. In fact, the Mughal chronicles such as Maasir-I-Alamgiri and Muntakhab Al Lubab admit it was held by Hindu kings before it passed into the hands of Mμslims.

When Sultan Quli took over Golconda, he made several “modifications” to the site. He added some fortifications. He converted the Golconda central fort temple into Jami Masjid. Today, this is known as “Hyderabad’s oldest Mosque”.

Even today, we can see the traces of Hindu temples in the Golconda Jami Masjid. The kakatiya temple decorations such as stambhas, ratnas, vallis and sakhas can still be found on its doorway.

The Hindu character of Golconda was gradually effaced. The hill temple was later converted to Taramati masjid. Much later, Akkanna Madanna temple was destroyed by Aurangzeb. However, the cave temples survived. The Jagadamba cave temple exists even today inside Golconda fort.

Sultan Quli was murdεred inside the very mosque he himself built on Hindu temple site when he was performing Namaz. As fate would have it, the murdεr was executed by his own son Jamshed Quli. Jamshed then usurped the throne.

Jamshed Quli then began hunting for his brother Ibrahim Quli. Ibrahmin fled Golconda and sought refuge in the Hindu kingdom of Vijayanagara. He was warmly received by Vijayanagar king Ramaraya. Ibrahim happily spent seven years in Vijayanagara and he was also granted a jagir.

A few words about Vijayanagara emperor Ramaraya. Ramaraya was quite “secular”. He favored Mµslim soldiers and placed Quran above the throne for the courtiers to pay respect.He allowed them to construct Mosques and perform animal(cow?) slaughter despite opposition by his brother.

Naturally,Ibrahim Quli felt quite at home in Ramaraya’s kingdom.He was married to a Vijayanagara royal lady named Bhagirathi. Ramaraya used to address him as ‘Farzand'(son). After 7 years, Jamshed Quli died &Ibrahim went back to Golconda to win war of succession& take the kingdom.

It must be noted that in the war of succession, Ibrahim received tremendous Hindu support under Ramaraya’s auspices.At Koilkonda fort on his way to Golconda , the Hindus pledged loyalty and support to him

In Koilkonda inscription, Hindus promised “We pledge support to Ibrahim Quli. Any of us who breaks the promise will have incurred the sin equal to kiIIing of cows and brahmins in Varanasi”. He was later called Malkibha(rama), equating (Malik) Ibrahim with Lord Rama. With such support, Ibrahim naturally gained the throne and became the king.

However, the same Ibrahim joined later hands with other Mµslim Sultans of Deccan and attacked Vijayanagara kingdom in battle of Tallikota in 1565.
Talk about gratitude!

In Talikota war, Ramaraya’s Mµslim regiment under Gilani brothers turned traitors and joined hands with the invading sultans. The battle was lost and Ramaraya was beh ε aded in the battlefield. The mighty Vijayanagara empire collapsed.

After the war the Deccan Sultans sacked Vijayanagara for 6 months, looting and burning everything they found. Ramaraya’s “Farzand” Ibrahim appointed his brother-in-law and a minister for sacking + treasure hunt.

The loot Qutub Shahis acquired by sacking Vijayanagara was so much that, almost 30 years later, a part of booty was large enough to commission the construction of Hyderabad

Ibrahmin Quli died and was succeed by his son Muhammad Quli. Muhammad Quli married Bhagmati. Hyderabad was named after her. Some “intellectuals” now see this as ‘love jihad’. Nothing could be farther from truth.

It was Muhammad Quli who established Hyderabad & built Charminar. Muhammad Quli was raised by his Hindu mother. He fell in love with and married Bhagmati early in his life (c. 1589 CE). In his Urdu poems known as “Kulliyat”, he reveals some startling truths about himself.

Muhammad Quli reveals that he was a Hindu in his early life. He was raised in the faith of his Hindu mother. Later in his life, he left Hinduism and adopted the Shia cult of his paternal ancestors. He speaks thus in his Kulliyat.

Quli was,acc to his own admission,a Hindu when he married Bhagmati.There is no evidence that Bhagmati ever converted.That explains why she has no tomb. Thus,it was not “love jihad” by any stretch of imagination. This also explains why his wedding is depicted with Hindu rituals.

Here is an old painting of Bhagmati (now in Salar Jung Museum, Hyderabad). She must have exerted a tremendous influence. She had a contingent of 1,000 soldiers accompanying her. Quli styled her as “Hyder Mahal”(“brave beloved”). Both Hyderabad and Bhagnagar are named after her.

Hyder Mahal/Bhagmati wore a crown and she called the shots in Qutub Shahi kingdom. Here is a poem from Muhammad Quli’s Kulliyat explaining why she deserves to wear a crown.

Some “historians” like Sherwani & Faroqui have indulged in fraud,lies and deceit to deny the historicity of Bhagmati. Citing “French travelers”, they claimed Bhagnagar came from “Bhag” meaning gardens. Does the French traveler really say so? Let us examine primary sources.

In truth, the French traveler clearly talked about Bhagnagar being named at the request of his wife. Sherwani completely ignores this statement and he fraudulently interpolates “gardens’ out of nowhere.

Also, it is extremely stupid to believe that Bhagyanagar must be named after gardens. Which gardens are they exactly talking about it?There was extreme scarcity of water in Hyderabad. In those days, it was almost impossible to maintain gardens and Ibrahim Quli’s attempt failed.

Intially, the Gardens were confined only inside the Golconda fort.
The Chichlam area had NO GARDENS when it was called Bhagnagar. It was only in the 17th century that gardens propped up. Much later, gardens were established near Basheerbagh (Bagh E Aam) and Hussain Sagar.

The fact that Bhagyanagar was named after Bhagyamati and not ‘gardens’ is proven by the fact that the chronogrammatic name of Hyderabad on coins is “Farkhunda Bunyad”. Farkhunda in Persian means luck( Sanskrit Bhagya) and not “gardens” (Persian Bagh).

There is contemporary Mughal evidence for existence of Bhagmati. During her own lifetime, Abul Fazl’s brother came to Hyderabad in 1591. His testimony proves the existence of Bhagmati & is a slap to those who deny her historicity. Notice the kind of language he used for her.

Another contemporary Muslim chronicler named Nizamuddin also wrote about Bhagmati in 1594 in her own lifetime. He testifies that Hyderabad/Bhagyanagar was named after her. Again, notice the language used for her. There is a good reason why they used such expletives against her.

Another contemporary Muslim historian Ferishta also testified Bhagyanagar/Hyderabad was named after Bhagmati. What explains their embarrassment & use of derogatory language? The fact that Hyderabad was named after a Hindu queen who never converted did not go well with them. The name “Bhagyanagar” never went out of vogue and continued to be used even in the 19th century.

Here is Bhagnagar in an 1816 map, charted by British EIC cartographer Aaron Arrowsmith

These evidences clearly establish Hyderabad was named after Bhagmati. But the Bhagyalakshmi Temple has been under attack. The secular ASI calls Bhagyalakshmi temple an “unauthorised construction” and pushes for removal of temple. From ’60s, we have been asking to remove Bhagyalakshmi temple: ASI As of now, there is a case lodged with the High Court, and the court has asked them to maintain status quo and stopped the temple’s further expansion. 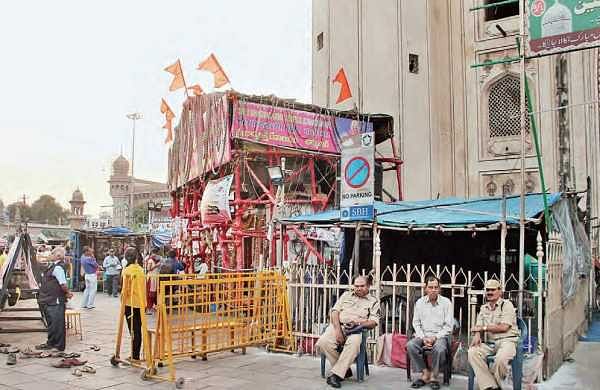 From ’60s, we have been asking to remove Bhagyalakshmi temple: ASI
As of now, there is a case lodged with the High Court, and the court has asked them to maintain status quo and stopped the temple’s further expansion.

While the ASI calls the Temple an “unauthorised construction”, Government’s Endowments Department lists Charminar’s Bhagyalakshmi Temple among ‘registered temples’. The state government usurps the Temple income for its secular purposes. In 2012,when temple organisers wanted to perform temporary construction for Diwali,the police forcibly stopped them. So 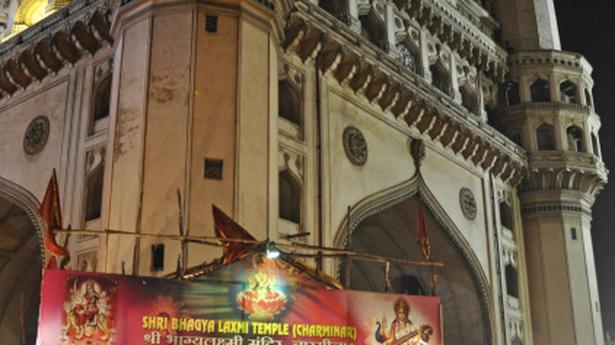 Extension of temple illegal – ASI
No hole was drilled into Charminar, say officials

They say the temple is causing damage to the heritage site Charminar and must be removed. But they are ABSOLUTELY SILENT about the recently created Sufi Chilla that is inside Charminar complex and encroaching the charminar’s space.

Sources used in thread until now:

Caveat:With the exception of great historians like Sita Ram Goel and Jadunath Sarkar,I do not agree with the authors on everything they have written in their books. While they are informative and occasionally insightful,there is an inherent bias and dishonesty among many of them.

Covid-19 Vaccine FACTs: All you need to know !